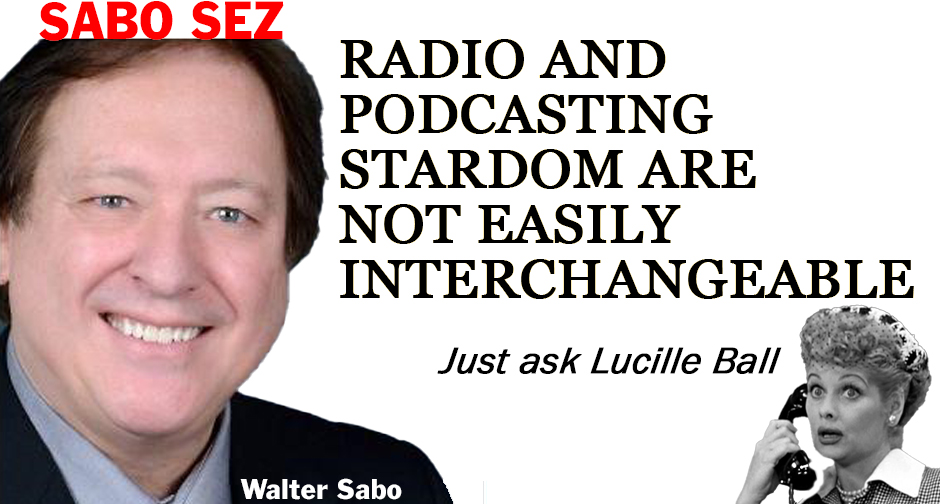 Stars and Their Platforms

Lucille Ball earned 50 shares with her classic TV series, “I Love Lucy.” Every year during her summer hiatus she would make a movie. Name a Lucille Ball movie.

Lucy was the all-time star of television but couldn’t open a movie. Each medium creates its own stars and rarely does a star transfer from one medium to another.

The phenomenon of single medium stardom is true throughout all crafts. Great magazine writers struggle to turn in a publishable book. Book authors are challenged to condense their thoughts to 1,000 words. Megyn Kelly is a cable star but couldn’t cross the golden bridge to broadcast TV.

Every year a local TV weather person bugs the local talk station to fill-in on a talk show over a holiday. How does it go? Beware the fifth minute. After five minutes all of the passionate feelings the TV talent has about their pet topic have been expressed. With two hours and 55 minutes to go, the local weatherman is in trouble hosting an unscripted radio show. Where is the prompter? Where are the phone calls? But put a radio morning host on TV and the results are just as awful. The radio host looks fat because they have no idea how to dress for TV, they don’t understand the cue lights on the cameras and the prompter is confusing.

Which brings us to the relationship between radio and podcasting

One of the burdensome falsehoods of the moment is that radio talent should be churning out original content podcasts. It’s just audio right? Radio is good at talking! Podcasting has fostered its own stable of stars including Joe Rogan, Adam Carolla, Anna Farris and Ben Shapiro (I know he’s a radio guy, but he’s a better podcaster). To a listener, the production styles of a podcast and live radio are strikingly similar, but you know that the production environments are completely different. Talent who intuitively understand on-demand audience preferences thrive hosting commercial-free podcasts. Radio talent excel within the disposable, often-interrupted flow of a live broadcast. Podcasts allow for thinking time, pausing, editing, correcting and fancy production beds. Live radio? You just better get to the next thing. The mindset of a podcast star versus a radio star must of necessity be appropriate to their unique performance stage.

Most radio managers have met with resistance when asking their talent to make original content podcasts. (Not air checks.) Radio talent is right to resist! Creating a very good radio show is demanding and often exhausting. After three or more hours on the air, no performer has the energy to hop into a production chair and attract a million downloads. Tragically mandatory podcast dictates leave little opportunity for talent to say, “I can’t do a podcast well. I’m a radio performer and isn’t that what you hired me for?” My goodness – such a radio talent would be labelled insubordinate, not a team player, and not part of the future!!!

To be productive and on-brand podcasts offered by a radio station should be hosted by podcast stars. The odds of a radio star creating a winning podcast are about the same as finding a Lucille Ball hit movie. 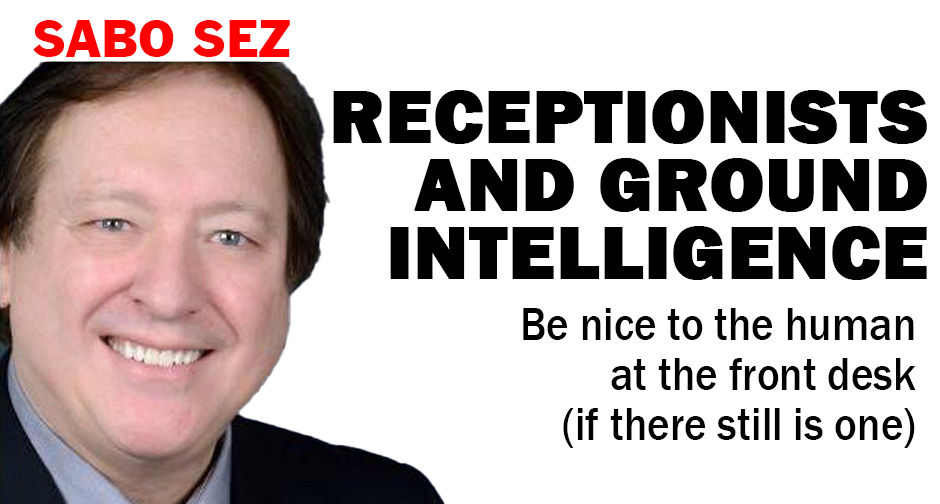 SABO SEZ: RECEPTIONISTS AND GROUND INTELLIGENCE – Be nice to the human at the front desk (if there is still one).

When thinking about the changes in the radio industry I’ve seen during my career, I’m dragged to memories of the lobby of WXLO-FM in New York (WOR’s FM sister).  The station was on the second floor of 1440 Broadway. WOR-AM was on the 24th and 23rd floors.  In technical terms, the place was a dump. Dirty linoleum. Ancient office furniture.  The original ceiling was spray painted black to hide the fact that it was not an acoustic drop down ceiling. Not one window in the place. BUT the signal was the best on the FM band. WXLO was the first station to hire me almost out of college. I needed a summer job between my junior and senior year but WXLO did not have summer jobs.  The general manager, Arthur Adler offered me a full time job which I accepted immediately.

For my on-boarding process Arthur walked me to the fluorescent sales area and pointed to an empty cubicle.  Then, he vanished. Next his secretary escorted me to the personnel department many flights up.  I was seated next to an official person who was gathering many forms for me to fill out. These forms included the all-important TUITION REIMBURSEMENT form which compelled RKO General (the station’s then-owner) to pay for my last semester in college. (I attended Rutgers at night and had the credits transferred to my diploma school, Syracuse University.) On the official person’s desk sat a three-ring binder wide opened to the KHJ (Los Angeles) TALENT page.  Wide open. Staring at me, beckoning, teasing me to look. What could I do? Robert W Morgan, morning man, HIGH five figures a year.  The Real Don Steele, PM drive mid-five figures. Every other jock was paid AFTRA scale.  It was a crash course in radio economics and I wasn’t even a legal adult.  But I digress. Now for the point.

A few days later the front door on the second floor was banging. The receptionist, a kind, timid person, hit the intercom key and asked who was knocking?  Even back then, at 40th and Broadway visitors were a high security issue. That door was locked for about a million good reasons. Who was at the door?  A “menacing” man in a fancy suit and perfect hair said his name, but the receptionist did not recognize him or his name. He repeated,  “I’m THE PRESIDENT OF THE COMPANY.”  That’s what he said.  But he wasn’t. He was the vice president.  I learned a lot then too.

A receptionist is not just the gatekeeper to the business. He/she could be the gatekeeper to your career, or fortune. That is, of course, if the establishment you are visiting still has a receptionist.  My brother, the smart one, is a financial big shot. Highly respected, oddly humble. Companies come to him for funding. Executives seeking financial backing sit with his receptionist for an unusually long time. When the visitors are invited from the lobby to the conference room, they are ALL invited into the conference room – including the receptionist. The meeting starts with my brother asking the “receptionist” for her impressions of the guests.  Then it is revealed that the receptionist is actually a high ranking, decision-making executive.

The second floor receptionist at WXLO let her feelings about the boisterous vice president be known and said VP was not titled for long. Dumb companies have eliminated receptionists and instead greet visitors with touch tone wall phones and posted extensions directories.  The loss of ground intelligence is significant – especially if the station is located in a high-priced downtown office building designed to impress.

Plus a lot of executives waste time running to the door to get food orders. False economy.