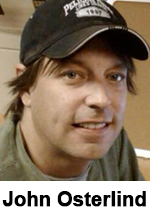 Authorities found him unresponsive at his apartment on Thursday (12/29) and at this time the cause of death is unknown. Osterlind had been morning host at Audacy’s classic rock WKBU, New Orleans. While he worked in rock formats during his career, he’d also served at news/talk stations, including iHeartMedia’s WRNO-FM, New Orleans and then-Entercom’s WRKO, Boston.