The vast Hofstra University community, its Lawrence Herbert School of Communication and the greater national radio broadcasting industry mourn the passing of longtime WRHU Radio general manager Bruce Avery.  Avery passed away peacefully at home Saturday evening (1/14) after losing a five-year battle against an aggressive form of prostate cancer.  He had held the position at the Long Island, NY facility – until his recent retirement in 2022 – since 1994.  During that 28-year period, he successfully mentored countless students of radio broadcasting and played a major role in building the multi-Marconi Award-winning WRHU-FM/WRHU.org into a powerhouse among America’s campus radio stations. In 2021, WRHU was the recipient of the 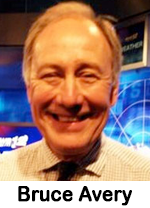 prestigious “World Radio Day Award” from the Academy of Radio Arts and Sciences of America in conjunction with the United Nations‘ UNESCO General Conference.  Recent recipients of this high honor include WTOP, Washington, DC; 1010 WINS, New York; and KDKA-FM, Pittsburgh. WRHU is the only campus radio station to receive this award. Hofstra University president Susan Posner states, “Bruce was an incredible friend and mentor who had a major hand in turning WRHU into the multi-Marconi award winning station that it is today. We will truly miss Bruce and cherish everything he gave to WRHU. Our thoughts are with his family and friends.”  Lawrence Herbert School of Communication dean Mark Lukasiewicz adds, “Our heartfelt sympathies go out to Bruce’s widow Veronica, his children, and his extended family. We were fortunate to be able to celebrate Bruce’s career with him only a few months ago at his retirement luncheon, where former students and colleagues shared stories and fond memories of his decades of service at WRHU. At that event, we announced the establishment of an endowed scholarship in Bruce’s name, recognition of the deep impact he made on generations of students.”  For the past two decades, Avery also served as an extremely popular meteorologist on News12 Long Island which posted a heartfelt video tribute to his legacy that you can see here. Funeral arrangements have not yet been announced.