Next Wednesday (2/1), sports talk radio legends Mike Francesa and Chris “Mad Dog” Russo will reunite for a two-hour appearance on ESPN’s morning show, “First Take,” with Stephen A. Smith and host Molly Qerim. Russo and Francesa co-hosted their show on WFAN, New York from 1989 through 2008 and became the 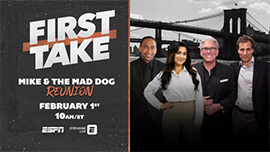 template by which sports talk debate shows were often created. Smith says, “When we think about sports debate shows’ inception, in my opinion it starts with talk radio. And there is no way on earth you can talk about talk radio without bringing up ‘Mike & The Mad Dog.’ This business has changed – and flourished – because of what they accomplished as a dynamic duo spanning 19 years. They are, unquestionably, the standard. So, it’s easy to says that not only am I looking forward to having them reunite on ‘First Take,’ I’m HONORED to have them. Can’t wait.”