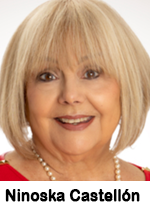 known South Florida media personality who was born in Cuba and raised in Miami and is an activist in the fight for freedom in Cuba, has appeared in national and international media outlets including “Nightline,” CNN, “Hannity,” “The O’Reilly Factor,” Al Punto Univision, and MSNBC as an expert on Cuban issues. Salem Media Miami VP and general manager Monica Rabassa comments, “We are extremely happy and honored to have Ninoska Pérez Castellón join Salem Media Miami. Ninoska’s unrelenting voice in support of freedom and just causes now has a new home at ‘La Nueva Poderosa 670 AM.’” Pérez Castellón states, “I am thankful that Salem Media, a powerhouse in conservative thought, has stepped up and given Hispanic conservative voices a home at a time when we have been under attack for the sole purpose of silencing us. I am extremely happy to be back on the airwaves connecting with the audience I love.” In addition to Ninoska’s program, the station’s revised lineup will also feature Father Albert Cutié, a.k.a. Padre Alberto, who currently hosts a television talk show produced and transmitted by Mega TV in South Florida, and nationally on DirectTV and AT&T U-verse.