Former talk radio host Jay Marvin died on Tuesday (1/31) at age 70, according to a Twitter post from his wife Mary. The cause of death was not revealed. Marvin left the talk radio business in 2010 after a series of health issues – hepatitis and a spinal infection – made it difficult for him to focus on his work. During his career, he 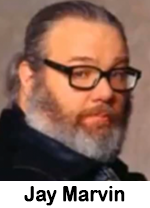 hosted programs at WFLA, Tampa; KHOW and KKZN, Denver; and WLS-AM, Chicago; among others. Salem Radio Networks VP news & talk programming Tom Tradup hired Marvin at WLS. He tells TALKERS, “I brought Jay to WLS in Chicago by helping negotiate his way out of a contract he had with Carl Gardner at WTMJ, Milwaukee. We added him 10:00 pm-1:00 am and he was an instant hit, billing himself as “Chicago’s lovable manic-depressive” who championed striking cab drivers and teachers’ unions… so unlike our other conservative hosts at the time. Fans even turned out by the thousands for his annual “JayStock” festivals in Wisconsin. Jay was one in a million.”