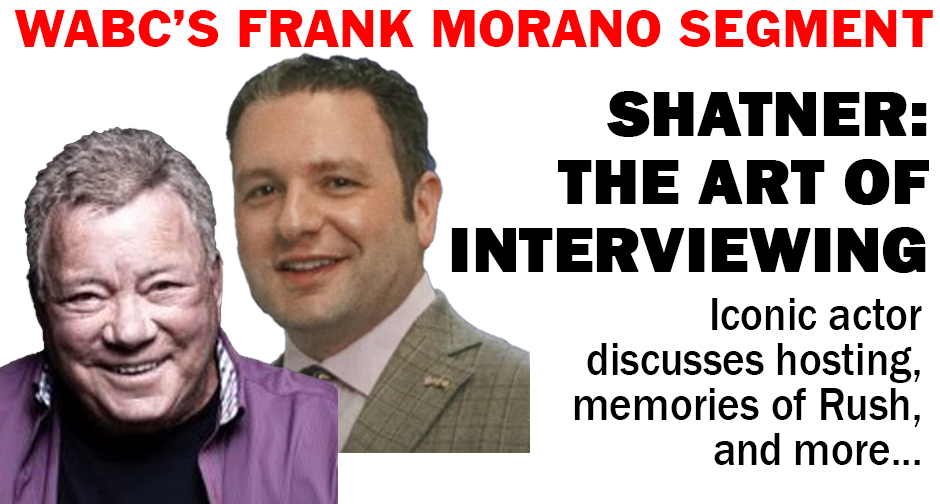 SHATNER: THE ART OF INTERVIEWING

Frank Morano, host of WABC, New York’s overnight show “The Other Side of Midnight” scored and delivered a superb interview with entertainment legend William Shatner last night (1/11) in which the iconic actor discusses his experience and views on the art of interviewing including poignant memories of his one-on-one encounter with Rush Limbaugh.

Morano tells TALKERS, “By way of background, I’m the world’s biggest William Shatner fan. I easily fit the fanboy category and depending on how you count, I may even fall into the groupie category. I’m a lifelong fan of everything he’s ever done from ‘Boston Legal’ to ‘TJ Hooker’ and everything in between. I’ve had the opportunity to interview Shatner a few times before and it’s always gone well, including a recent interview that [WABC owner] John Catsimatidis and I did with him about going to space. Anyway, this morning, I got to interview him about some upcoming screenings of Star Trek II: The Wrath of Khan that he’s hosting with an audience Q&A afterwards. I was planning on going to one of the New Jersey screenings because, like I said I’m a fan. It’s an interview that I’d been preparing my whole life for. Evidently, Shatner noticed. In the midst of the interview he actually invited me to join him on stage at the New Jersey performances (2/10-11) to help facilitate questions from the audience.”  TALKERS publisher Michael Harrison describes Morano as one of “talk radio’s brightest rising young stars.” Harrison states, “Frank expands the scope of talk radio beyond just politics to include pop culture and human-interest stories that are extremely compelling and engaging.  He also brings an unassuming innocence and joy of performing to the airwaves that we can all find inspirational.”  WABC parent company, Red Apple Media recently launched Morano’s show into national syndication where it is now carried in Eastern Long Island, Maryland, Tennessee and Alaska.  To listen to the William Shatner interview in its entirety, please click.