New England Public Media tells TALKERS that it is hiring Western Massachusetts morning personality Monte Belmonte as host and executive producer of a new radio show and podcast “celebrating life in Western Massachusetts.” Belmonte has been hosting “Mornings with Monte” at Saga Communications’ triple A WRSI, Turners Falls, MA “93.9 The River.” Also joining Belmonte at NEPM is Kaliis Smith, who served as evening personality at WRSI and served as a regular guest on Belmonte’s show. With NEPM, Smith will be the show’s digital producer and will join Belmonte on air. 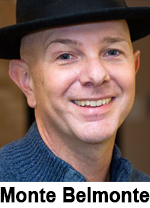 NEPM president Matt Abramovitz says, “When you listen to Monte Belmonte, you hear not only a great host with a devotion to his craft, but also a person who is committed to building and bolstering his community. Sharing the unique voices and stories of our region and using the airwaves for the common good is what public media is all about. We are excited to have Monte bring his enthusiasm and love of western Massachusetts to NEPM each day.” The programming will launch later this winter. Belmonte comments, “I’ve been a huge fan of New England Public Media since I moved west of Worcester 20 years ago. The station’s trusted reputation and broad reach was a big draw for me, as was the opportunity to work alongside people I’ve known and admired for years. I’m excited to get to work building a new show that’s all about celebrating what’s good about living here, meeting interesting neighbors and being a better community because of it.”