Tom Barnard and Hubbard Partner for Streaming Show and Podcast

According to a report from Bring Me The News, former KQRS-FM, Minneapolis morning personality and legendary Twin Cities radio host Tom Barnard is entering into a deal with Hubbard Broadcasting to host a 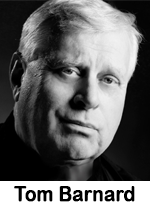 daily morning program streaming on audio and video from 7:00 am to 10:00 am CT and available as a podcast that the company will produce, distribute and sell. Bring Me The News says, “Barnard will be joined by a co-host, producer, and a number of other guests and contributors. Barnard left KQRS on Dec. 23 after 37 years hosting 92 KQ’s Morning Show, which for a period in the ‘90s was the highest rated morning radio show in the entire country. As he prepared to leave the station, Barnard claimed in an interview with the Star Tribune he had been forced out the door at KQ by parent company Cumulus Media, which had described Barnard’s departure as a ‘retirement.’” Barnard’s new show is expected to debut sometime next month. On Monday of this week, KQRS launched its new morning show hosted by radio personality and former Black Crowes drummer Steve Gorman.